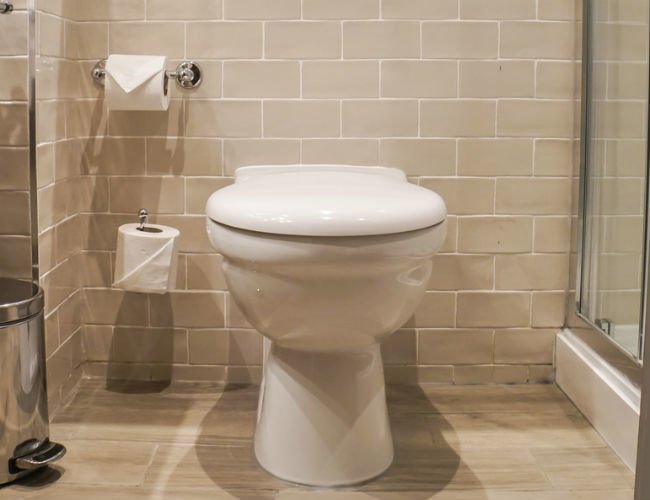 Get the scoop on a special tool and the right techniques that will make this basic bathroom upgrade a snap.

Thanks to their solid construction and simple design, toilets often outlast other bathroom fixtures, but they don’t last forever. After a decade or so, heavy lime deposits can build up, resulting in clogging or slow flushing, and the seals between the tank and the bowl can harden, crack, and begin to leak. Even if a toilet is still in good working order, homeowners often upgrade to a model that blends better with a bathroom remodel or features the newest technology. And when that time comes, well…

Let’s be honest. Replacing a toilet is an unpleasant task, not because it’s technically difficult—it’s not—but because toilets are heavy and unwieldy, and no one really wants to get up close and personal. Daniel O’Brian, the technical expert for the online plumbing retailer SupplyHouse.com, has the secret to making this job easier: a simple new tool called the Pick Up Stix. This handy tool is designed to assist professionals as well as savvy do-it-yourselfers in lifting and carrying a toilet. Armed with a Pick Up Stix and the following advice on best (and worst) practices, you can minimize the mess and hassle and have that new toilet in place in no time.

After shutting off the water-supply valve to the tank, flush the toilet, holding the handle down to drain as much water as possible from the tank. Some water will remain in the bottom of the bowl; bail it out with a cup or sop it up with a large sponge. Be thorough: Any water that remains will usually end up on the floor when you remove the toilet.

See also  How To: Choose an Exhaust Fan 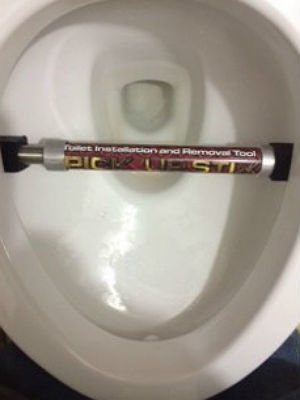 Despite your water-removing efforts, the toilet’s internal P-trap (located below the bowl) will contain water. Any little tilt or wobble of the toilet as you move it will cause that water to drain out onto the floor. To deal with this, plumbers will often place a large utility pan on a flat dolly. When they replace a toilet, they’ll set the old one in the pan and then roll the whole thing out of the house. If you don’t have a pan, it’s a good idea to put heavy cardboard down on a dolly and cover it with old towels to prevent a mess.

DO protect your back when lifting a heavy toilet

After you’ve disconnected the water-supply line from the bottom of the tank and removed the decorative caps, nuts, and washers from the T-bolts that secure the toilet to the floor, it’s time to lift the old toilet. “Moving a toilet isn’t the end of the world; you get in there, grab it, and get the job done,” O’Brian says. “That being said, they are fragile. They are awkward to carry. And, odds are you will end up touching a part of the toilet you would rather not,” he continues. “Pick Up Stix offers a quick way to move a toilet without grabbing that inner rim.”

The Pick Up Stix Toilet Installation and Removal Tool (available from SupplyHouse.com for $29.95) is a lightweight, spring-loaded bar with nonslip rubber end caps that provides a sturdy handle for lifting the toilet from its base. To secure it to the toilet, just fit one end of the bar under the rim of the toilet bowl and then compress the bar enough to slip the other end under the rim on the opposite side. You can position the Pick Up Stix from side to side of the bowl or from front to back, whichever works best for your grip. “The Pick Up Stix is basically a little pogo stick,” O’Brian explains. “A big spring keeps it extended normally, but when you push it down it compresses, letting you put it into the bowl.”

See also  Bathroom Floor Tile: Which Is Best for You?

Once the Pick Up Stix is in place, you can grab the center of the bar and lift the toilet straight up and off the bolts. Use your free hand to stabilize the back of the tank as you lift, and then place the toilet on the prepared cardboard or in a utility pan. For more information, check out this video that shows how Pick Up Stix makes moving toilets a whole lot easier on your back—and more hygienic as well.

The tank lid is not fastened to the top of the tank—tilt the commode to either side while carrying it, and the heavy porcelain lid is likely to slip off and fall. Not only do porcelain tank lids break easily, they can chip and dent flooring as well. While professional plumbers are wise to this, household DIYers often make the mistake of leaving the tank lid on and end up having to clean up a shattered lid or repair damaged flooring. Avoid these mishaps when replacing a toilet by simply setting the lid aside and carrying it out separately.

While this handy little spring-loaded bar makes removing the old toilet a snap, it’s even more useful for setting the new toilet in position. After a new wax ring is in place on the floor flange (you should have completely scraped away the old one with a putty knife), position the Pick Up Stix beneath the rim of the new toilet bowl, then lift and center the bowl over the flange. Carefully lower the bowl, keeping the holes aligned directly over the flange bolts. “You can carry it securely with just one hand, freeing up your other hand to guide the toilet right into place,” O’Brian says.

Keep the rim of the bowl parallel with the floor as you lower the toilet into place. As it meets the wax ring, you’ll feel a little resistance. Then you can lightly wiggle the toilet from side to side until its base rests solidly on the floor. Alternately, you can turn the new toilet bowl upside down (or on its side) and affix the wax ring to the underside of the drain before lifting and positioning the bowl over the flange in the floor. Either way, be sure to align the T-bolts in the flange with the holes in the base of the toilet and keep the toilet rim level as you position it over the bolts—these precautions will help prevent damage to the pliable ring.

DON’T over-tighten the nuts on the toilet bolts

After the toilet base is in place, put the washers and nuts over the bolts and snug them down—just not too tight. In many cases, finger-tightening is all that’s needed. Many a DIYer has found out the hard way that tightening the nuts too enthusiastically can result in a chipped or broken toilet. This also holds true for the bolts that attach the new tank to the bowl (unless you purchased a one-piece model). Snug them gently, then complete installation and fill the tank with water. If you then notice any leaking between the tank and bowl, you can tighten the nuts just a bit more. That’s usually all that’s needed to stop any drips.

Solved! How to Get Rid of Pink Mold in the Shower for Good
Solved! What Size Bathroom Fan Best Supports Your Space 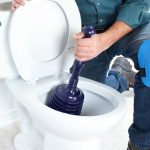 The Right Way to Use a Plunger 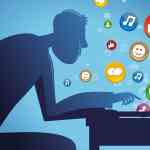 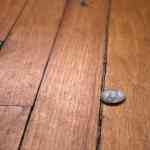 How to Repair Gaps Between Floorboards