How To: Install a Sump Pump

If you have a wet basement, installing a sump pump can have significant payoffs. Not only will a sump pump help control basement moisture and protect your home and foundation, but it will greatly add to your peace of mind. So dig in!

In an ideal world, there’d be no basement flooding. But in reality, despite our best efforts to address the underlying issue, basement moisture remains a sometimes expensive, always exasperating difficulty for many homeowners. In one way of looking at it, by installing a sump pump you may be treating the symptom and not the disease—the source of the moisture. But in the absence of superior, inexpensive options, a sump pump is an effective stopgap. Bear in mind that the technology doesn’t do anything complicated: Essentially, it collects floodwater and then pumps it away to the outdoors, where it can drain safely into the ground. Although—or perhaps because—a sump pump operates so simply, installing one can make a world of difference. Read on to learn how to install a sump pump in your basement. 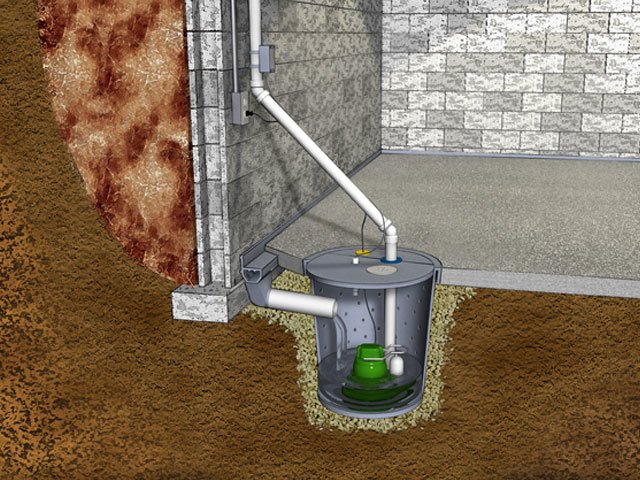 Identify the lowest point in your basement, the area where you usually first notice moisture accumulation. Here, dig a hole wide and deep enough to accommodate the sump pump (the top edge of which should ultimately sit flush with floor level). Of course, when your basement floor is concrete, digging a hole is more easily said than done. To break through, you need to use either a sledge or jackhammer. After penetrating the masonry, continue digging until the cavity can fit the pump basin.
Advertisement

The most effective sump pumps typically feature weep holes, which allow water to enter from the sides and from beneath. If yours doesn’t have these important perforations, take the time to drill them yourself. Next, wrap a layer of filter fabric around the basin exterior to prevent silt and sludge from clogging the basin. Add two or three inches of gravel to the bottom of the hole you created, then place a paver or fieldstone over those pebbles in order to establish a stable platform. Now place the sump pump into the hole, backfilling around its perimeter with excavated dirt. At this point, the unit shouldn’t wobble even if you gently jostle it.

For the sump pump to do its job, its float valve must be able to move freely up and down. When the water level rises, so too does the float—and when it does, the sump turns on. It’s crucial to test the float valve before going any further. Move it up and down with your hand to make sure there’s nothing obstructing it.

Of equal importance is the check valve, which channels water away from (never back into) the sump. Between the valve and the home exterior, run either a flexible discharge hose or a span of PVC pipe (with glued joints and, if necessary, elbows). Where the output meets the basement wall, make a hole big enough for the hose or pipe to fit through. To do so, use a drill/driver fitted with a hole-saw bit. Once you’ve run the pipe through the hole, caulk around it to fill any gaps, large or small.

READ  So, You Want to… Insulate a Garage Door

Finally, plug in the pump and give it a test run. Fill the basin with water nearly to the top. The float should rise, the pump should turn on, and the water should pump out. Inspect the connections for leaks, and if all is in working order, place the lid over the basin. The very last thing to do is cover the hole surrounding the pump. This typically involves cement: Mix up a small batch to the consistency of peanut butter then spread it around to conceal all but the sump pump lid.

Finished! The next time a big storm comes your way, you can rest assured that you won’t have to run downstairs in a frenzy to rev up the wet/dry vac!