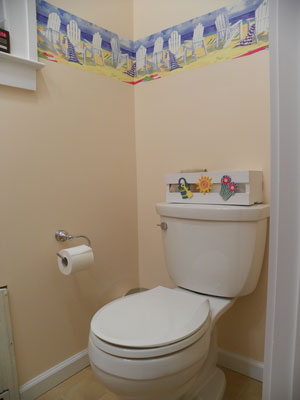 We can tell a lot about how previous generations lived by looking at the houses they built. For example, they clearly didn’t have as much “stuff” as we do, as evidenced by the lack of closet space.

Our Dutch Colonial had exactly five tiny closets—a matching set of three-foot-wide closets in the master bedroom, one each in the two smaller bedrooms, and one hall closet for coats in the entry. That’s it. We have too much “stuff” these days for such limited closet space! 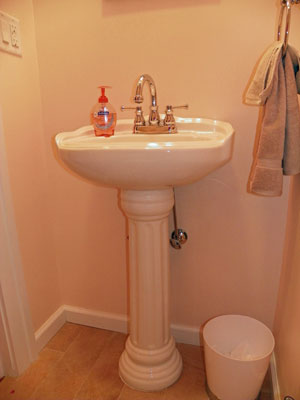 Our grandparents must also have spent a lot less time on daily ablutions, since they had large families but built a lot of houses with only one bathroom. Maybe it’s because, having only recently upgraded from outhouses, they considered even one indoor bath a luxury!

The previous owners of our house raised five children in it. They didn’t live there at the turn of the century—their tenure lasted from the 1950s to the 1990s—so I’m guessing they never used outhouses. But they lived with one bathroom, and they weren’t unusual. I myself grew up in an older house with two parents and five kids, also with one bathroom (not counting the creepy basement stall my dad used when the line was too long upstairs). 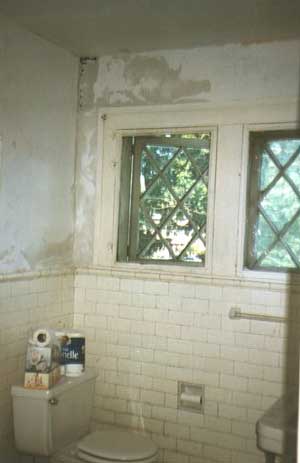 Our “new” old house also had a basement bathroom—not quite as creepy as my dad’s, but not a pretty site. (My brother referred to it as our “prison bath.”) It had a perfectly serviceable toilet, a pretty awful sink, and what was probably the home’s original clawfoot tub. It wasn’t terribly inviting, but when it was time for us to remodel the second-floor bath, we were awfully glad to have it.

We did a quick facelift on it before we started our bathroom remodel, since that was going to take several months. (We were turning our single bath into two back-to-back bathrooms, one in the hall and the other opening into the master bedroom.) Since the Alcatraz room was going to be our main bath for a while, we needed it to be a step up from the penitentiary.

We thought long and hard about restoring that clawfoot tub for use in the master bath, but ultimately decided against it. We did invest in a lovely handheld shower/faucet combination to allow us to bathe in it during the interim. (And even after we installed a $900 Jacuzzi in the master bath, that clawfoot is still the best soaking tub in the house.) A new sink, a decent paint job, and we were ready for our bath remodel. 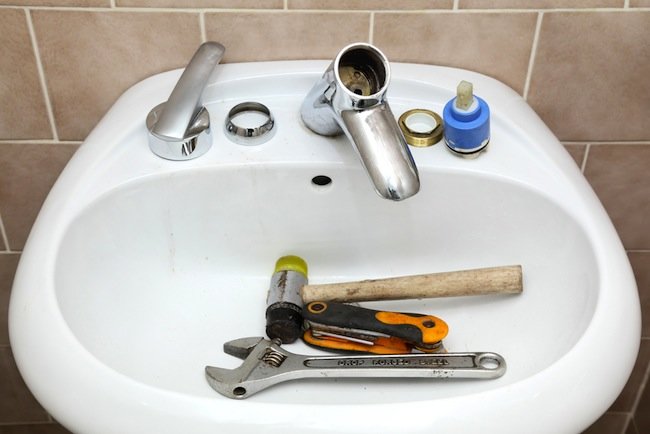 Our kitchen project finally solved the problem of not having facilities on the main floor. For the last decade, we’ve had a choice of going up a flight to our nice new bathrooms or down a flight to our face-lifted basement lav. It wasn’t exactly a hardship, but given two kids with their “emergencies” as well as older guests with bum knees—and us with muddy garden feet—we pined for a ground-floor bathroom.We got a lovely little powder room out of our kitchen project—it’s only 15 square feet, but it feels quite roomy. We chose a small pedestal sink (Arlington Petite from St.Thomas), since a vanity would have taken up too much space. We opted for a “comfort height” toilet (Cimarron from Kohler), which actually is quite comfortable—and at an amazing 1.28 gallons per flush, it’s super efficient.

We wanted a beach feel, so we chose a wood-look floor tile (6×24 Provenza Lignes porcelain) for our “boardwalk,” then added a wallpaper border with an Adirondack chair design. (A word of warning—a nine-inch-wide border is a bit overwhelming in a small room, and I suspect we’ll be replacing it with a narrower version with smaller chairs.) But voila! A visit to the lav becomes a day at the beach. (Well, at least it’s not prison!) 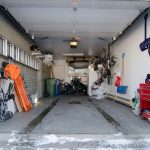 5 Great Ways to Heat a Garage in Winter 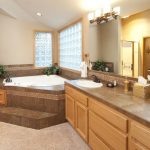 Solved! Dealing with a Carpeted Bathroom 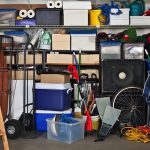 5 Steps to Solving All of Your Garage Storage Problems